How Much Fabric Do I Need to Make My Own Bias Tape?

Let’s take a look on how to make a bias. If you need a very short bias, you can cut part of the fabric you’re using and use that instead, however if you need a long bias, you likely have to cut out your fabric diagonally than connect it one by one.

I will explain how to make two types of the bias tapes. One way is to cut a portion (or corner) of the fabric that you are currently working on once or twice, if you are busy. The second is to have a certain amount of your fabric saved for just for the bias tape, which is a good way to do it since it uses the fabric efficiently.

1. Match the ruler to the 45 degree mark at the end of the fabric salvage.

2. Mark horizontal lines to where and as many you need. Once you have the desired length and amount of bias drawn out, then cut the marked lines with a rotary cutter or scissors.

3. If your cut bias is too short, you can connect your other biases to your needed length. Cut the end of the bias strip and make a square. When joining, the ends of the two bias should overlap while facing each other in 90 degrees. Then mark that diagonal line of the resulting square before stitching over it.

4. Cut off unnecessary parts so that the seam allowance is 1/4”.

5. Open the seam allowance and iron it.

Since you need to cut fabric diagonally it can be difficult to use the leftover fabric from making bias tapes. So, the next method is going to show how to make the bias from square cutout of your fabric.

When you are using this method, you will not only waste less fabric but also make a long strip of bias tape beforehand and cut to use it on later projects. To explain this method thoroughly, there will be a bias tape width chart provided. The chart might be helpful when cutting your bias tapes.

First of all, you will need to cut the fabric into a square, the dimensions can be determined according to your project. For this example, I will need a 3/8” width double folded bias in 50” length. To get this bias tape, the fabric square will be cut in 10 1/2” X 10 1/2” dimension with a quilting ruler for precision.

Draw a diagonal line through the square. Now, cut through the line drawn, and mark it as line C.

Match line A’s together with right sides facing each other and pin together. Stitch the two pieces in 1/4” seam allowance or less. In order to cut the bias later, stitch again sturdily so the thread wouldn’t unsewn itself.

Fold the fabric right side out following the stitched line. Press the seams open.

Draw the bias line till you reach line C and cut any leftover.

Fold fabric with the rights together and until each edge of line B faces together. 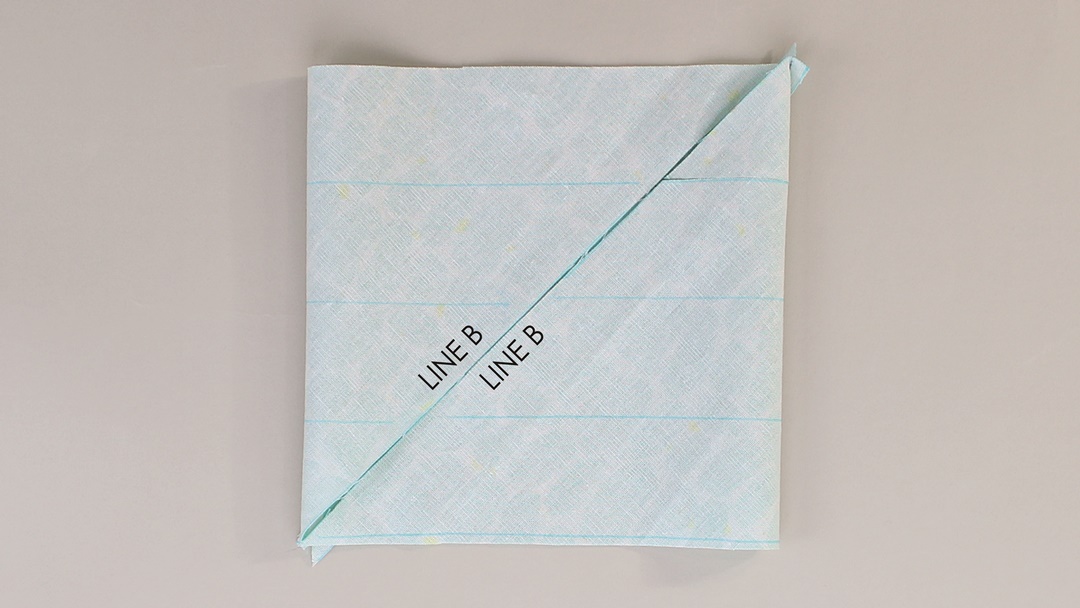 Start drawing the bias line from line B with the edge to the other side of the line B. Repeat the other ends in the same manner.

Pin the matching line together. Then stitch the line B, in 1/4” seam allowance or less. Stitch again sturdily so the thread wouldn’t unsewn itself. Press the seams open.

Cut according to the line and then the bias tape is made. 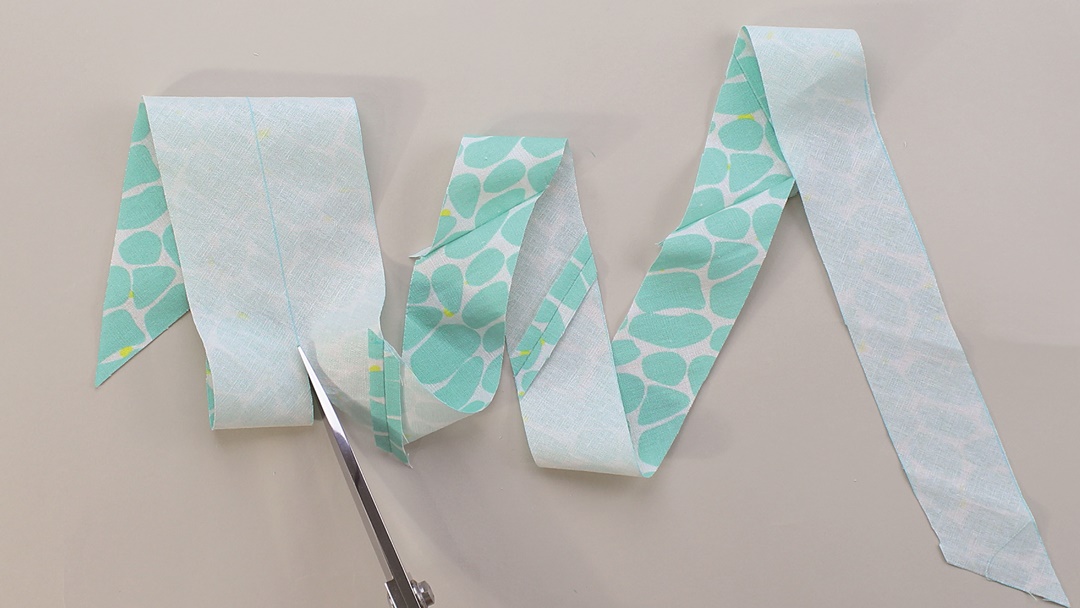 To make bias tape to your desired size what dimension should the square be? You can cut freely if you are experienced but if you’re not confident you can use this chart as a guide. This chart is organized for each bias width and approximate length. This is for you to use a guide and since the length may differ after it is made, make sure to check the length before cutting the pieces.

After connecting the bias strip, make the bias tape. When facing the bias, there is also a method of using without ironing the strip in advance, but it is easier to use if the bias is pressed.

1. Fold and press the bias strip in half, with wrong side facing each other.

2. Unfold the strip, then fold and press each longer edge of the strip toward half crease line wrong side of the fabric. – single folded bias

3. Fold the strip following the creased center line and press. This will be double folded bias.

If you are someone that use a lot of bias for your project, I would recommend you to use the bias maker. Once you try using it, it will be one of your favorite tools.

You will need a pointed tool like scissors or awl, to pull the bias tape from the shorter opening.

Iron the bias that came out through the smaller opening. You can see the bias in shape. Keep pulling the bias maker away from the iron, and make the iron follow the bias maker and press it.

The bias that is finished ironing is called a single folded bias tape.

If you this in half again, it’s called a double folded tape.

12/16/2020 5:35 AM
The bias articles are great.  Thank you. It is just so easy to order in bias but making your kwn opens up so many more possibilities and can be a great way of using odd lengths of fabric.happy Christmas. Stay safe and well. Ros

12/16/2020 11:12 AM
Thank you very much for explaining about the bias tapes. I was wondering how to make them and how much fabric I would need for a long time. I have ended up with some very short pieces to sew together or some diagonal pieces didn#39;t match. I also learned a lot from your article on single vs double bias tape. Thank you for sharing your knowledge and explained very well.

12/16/2020 4:51 PM
Thank you so much for this article.  I started sewing when I was really young. My grandmother retired from a garment factory and after retirement she started making quilts to help support her income. I#39;d spend weeks every summer with her and she would give me fabric and show me how to use her machine as well as how to hand sew and embroider. I learned a lot from her, but I taught myself a lot as well. I remember when I was really young having to make bias tape and thought how odd and awkward it was to have to cut it on the diagonal so I decided to cut it with the grain. Oh boy did I find out the hard way why you cut on the diagonal!  But that one time mistake allowed me to understand fabric better.

12/18/2020 10:47 PM
I was also wondering how to make the make the bias tape! The article helped me as well, especially with the cutting and making.

12/19/2020 3:51 PM
Thanks for your comment! I also had difficulties cutting biases so I made the table for myself to use. Hope it will be helpful for you too!

12/19/2020 6:08 PM
I was also wondering how to make the make the bias tape! The article helped me as well, especially with the cutting and making.

12/19/2020 6:37 PM
I enjoyed reading your story. Thanks for sharing it!. Your story somehow reminds me of the knit vest that my grandmother made for me when I was a little kid. I think it's always nice to have this kind of fond memories.
Article archive
Popular article tags